Last weekend I attended the Wikimedia Conference 2011 in Berlin, an annual event hosted by the German Wikimedia Chapter to bring together representatives from every Chapter together with the Wikimedia Foundation board and senior staff. Although I attended two years ago as a representative of the Australian Chapter, I was there this time in my new capacity as Wikimedia Fellow working on the area of cultural partnerships – something that is very much within the Chapters purview.

Whilst there were many different discussions going on (documented extremely well here) I’d like to talk about three things that I personally found important from this conference:
1) Editor Retention
2) Professionalisation
3) World Heritage [The obligatory group photo. Other photos may be found on commons here.]

This is a problem, probably the biggest problem we’ve ever had. We’ve known for a while that the total number of contributors is declining, leaving the task of maintaining the quality of the existing content (let alone improving it) to a decreasing group of people, but we’ve not known who is leaving or why. Thanks to the Editor Trends Study we now know who and we also know why. Old hands are slowly retiring (naturally enough) and there’s no shortage of people creating accounts and beginning to edit, but newbies do not stay around long enough to become true members of the community. They find it too difficult to edit technically and socially. [“Der! Took you long enough to notice” you might say, but at least we now have the data to back it up.]

Between 2005 and 2007, newbies started having real trouble successfully joining the Wikimedia community. Before 2005 in the English Wikipedia, nearly 40% of new editors would still be active a year after their first edit. After 2007, only about 12-15% of new editors were still active a year after their first edit. Post-2007, lots of people were still trying to become Wikipedia editors. What had changed, though, is that they were increasingly failing to integrate into the Wikipedia community, and failing increasingly quickly. The Wikimedia community had become too hard to penetrate. [The most striking of the graphs from the results of the Editor Trends Study showing that at the exact time Wikipedia hit the mainstream in 2006 editor retention became correspondingly difficult but has reached somewhat of an equilibrium since.]

[The total number of active contributors is slowly declining (English being worst than the average) even though the popularity of the sites are steadily growing.]

The first responses to this announcement on the mailinglist and on the wiki) were the usual: arguing why this isn’t actually a problem, questioning the validity of the methodology, blaming the messenger and personal attacks. Sounds a bit like the stages of grieving. The discussions that I’ve seen about this remind me a lot of this famous advertisement – “The German Coastguard”

We too are sinking, but no one can agree what we are sinking about! The urgent message is being lost amongst the Wikimedian tendency to focus on the details rather than the trend.

I’m glad that important and necessary steps of creating a WYSIWYG editing interface and new-editor-support tools are being prioritised as the “great movement projects” for the next few years. However, I suspect that a lot of the community backlash against these kinds of projects from the Wikimedia Foundation is due to a “siege mentality” that has developed – especially amongst those who regularly deal with new editors through “recent changes“, “new article” and “recent uploads” patrols. It’s not for nothing that new article patrol on English Wikipedia is colloquially known as “the firehose”.

Wikimedians engaged in those tasks are often blamed for the bitey culture towards newbies but it is also those people who are the ones maintaing Wikimedia’s baseline standards of educational value and free-licensing. So, when the Wikimedia Foundation says there is a need to “increasing participation” what many in the community hear is “more work for me to clean up the mess”. [Is this a Wikimedia admin being overwhelmed by the the firehose of new content to be checked, or is this a newbie being blasted by the Wikipolice? It depends on your perspective.]

I think it is instructive to note that with plans to improve the ease of uploading to Wikimedia Commons an equivalent and parallel priority is to improve the toolset available to review these uploads – they go hand in hand. The same is true for editing Wikipedia. There is no point in making it easier to edit if all that means is the existing community feels they are going to be overwhelmed dealing with contributions of low quality or limited encyclopedic utility – the contributions will be reverted and the new editors will have had an even worse first experience.

We need to “fight for the users” (à la TRON), but equally we need to remember we are not Facebook or Flickr where more always = better. Where the Chapters can participate in fixing this problem is by taking ownership of one of the lower priority/smaller tasks in the Product Whitepaper. This was a very popular session (documented here). Many Chapters are now at a stage and size where they have the desire and ability to hire their first employee(s). There are three ways to go about this (also summarised in Delphine Menard’s blog):
1) Administrative – someone to to do the necessary stuff, a.k.a. the “outsourcing option”
2) Programs – someone to take an agreed activity and Just Do It, a.k.a. the “Nike option”
3) Management – someone to be given the delegated authority of the Chapter board to decide the future of the organisation, a.k.a. the “executive option”.

The first (admin) is probably necessary to begin with – to handle the legal, financial or administrative requirements of a young non-profit with massive visibility and fundraising potential but it should not be seen as a way of making all the “boring stuff” disappear. The second (project) is useful when there’s a specific project (like a conference) to hire a contractor but such a role should not merely replace volunteers and the oversight required of that position mightn’t actually save any time in the end. I have long been of the opinion that if Wikimedia Chapters are going to reach their potential then they should look the third option (management) as soon as sustainably possible.

Currently, many chapters have a budget derived from the annual fundraiser which they invest in projects on a case-by-case basis, as agreed by their volunteer executive board. This decision-making power is amazingly high compared to nearly every other volunteer non-profit of a similar age but this power is also extremely hard to wield effectively. That is has not always been used effectively or transparently does not in my opinion mean that the Chapters concept has failed but that as volunteer organisations Chapters have been suffering extreme growing pains. As the Wikimedia Foundation is the “biggest kid in town” I see it as their responsibility to help the Chapters grow (even if it too is learning how to grow very fast too).

There is some discussion within the Wikimedia movement as to whether the Chapters are meeting the transparency expectations of the Wikimedia Foundation and legitimacy expectations of the editing community, whilst on the other hand there is some discussion about whether the Foundation is enabling or hindering the efforts of the Chapters to grow. Relatedly, recently the “Movement roles” working group has been trying to map out a way for groups that wish to support Wikimedia work (but do not wish to become Chapters) to exist – “friends of” associations in a manner of speaking. Already we have a group in Kansai, Japan who’ve said they wish to follow that path. 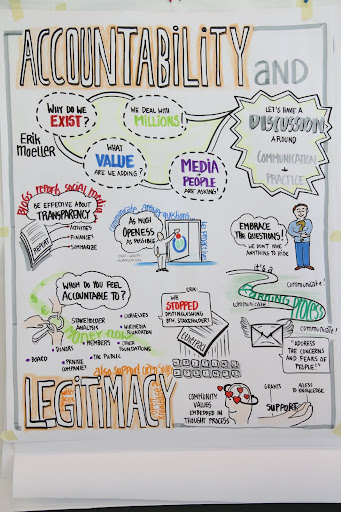 [One of the beautiful visualisations of the discussions from the conference.]

If the Chapters wish the Foundation to treat them as partners rather than merely fanclubs with fundraising potential, and if the Foundation wishes to see more chapters become net contributors to the movement (financially, socially, technologically) with a clear strategic direction, then in my opinion the Chapters need to look at moving from having executive boards to oversight boards – i.e. the “management” option. The existence of the “friends of” concept as a viable option puts even further weight behind the need for professionalisation amongst the Chapters. If the group simply wishes to apply for funding for specific projects then there is no need to be a formal Chapter – that’s not a criticism just a fact. But if the group wishes for Wikimedia to have a local presence in their country/region which leverages our impact online (and yet not be completely overwhelmed with all the concomitant administrative burden) then we cannot remain as a group of good-faith Wikimedians meeting by IRC or in the pub. For a Chapter board to cede control of the day to day decisions to an employed director may feel like a loss of power (which is why I think most haven’t done it) but in the long run it can only make that Chapter more influential.

This is the audacious (and in my opinion, excellent) idea from the German Chapter that Wikipedia should apply to become listed as a UNESCO World Heritage Site. They will be running a campaign over the next year to this effect starting with a dedicated petition website that urges the public to think about what cultural heritage means to them. 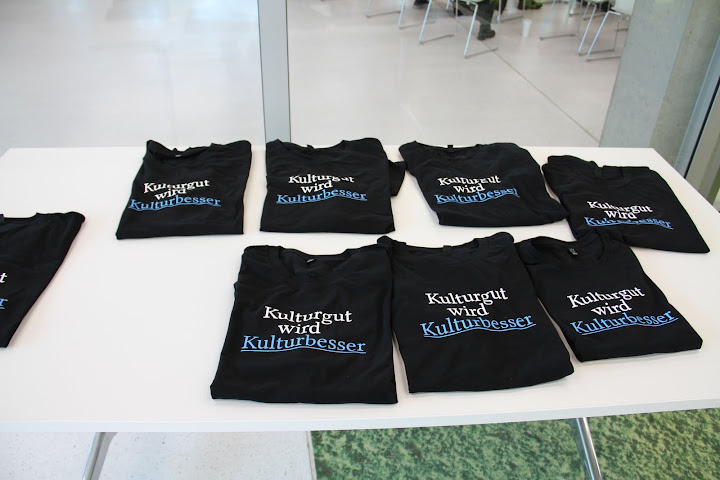 To be clear, the point is not necessarily to be awarded this honour but to engage the world in a conversation about what “cultural heritage” means in the digital era and to contest the idea that it must be something old, that it must belong to one country, and that society cannot be actively involved in it.

The criteria for inclusion are fairly broad and Wikipedia probably already meets at least three of them (only one is necessary):
i) to represent a masterpiece of human creative genius;
ii) to exhibit an important interchange of human values, over a span of time or within a cultural area of the world,
iii) to bear a unique or at least exceptional testimony to a cultural tradition or to a civilization which is living or which has disappeared;
There is also the more recent program to recognise “intangible” cultural heritage such as dances, songs, festivals… See the list at the official UNESCO website.

So, given that digital culture is important to global society (and increasingly so) why not apply to list Wikipedia as a world cultural heritage [web]site? Can you think of ANY other piece of digital culture that is more applicable to this than Wikipedia – especially since it is “living heritage”, it is not commercial and is dedicated to EVERY culture and language? Obvious criticisms of this plan include the facts that: all World Heritage applications are from one nation; being approved might mean UNESCO require Wikipedia be locked from editing; and there is no precedent for digital heritage. Whilst these are indeed valid concerns I would respectfully say that they are UNESCO’s problem, not Wikimedia’s! Yes, to a certain degree this is trolling UNESCO, but equally it’s also such a good idea they’d be mad to ignore it. At the very least having Wikipedia as World Heritage would make it quasi-illegal to block the website from being read in schools. 🙂

5 Responses to Themes from Wikimedia Conference 2011