A decade on Wikipedia – my 4 favourite unusual things

Recently I reached the milestone of 10 years editing Wikipedia. And what a ride it’s been…

I’ve not updated this blog for several years, and lots changed in my life since then: I got married, worked for the National Library of Australia, and now I live in Italy. I keep meaning to write here regularly, but the longer I leave it the more ‘significant’ I feel that first post needs to be. So, I’ll use this anniversary to post a list of my 4 favourite unusual things I’ve done on-wiki and that will hopefully force me to start writing here again!

For the 800th anniversary of the signing of the Magna Carta, British artist Cornelia Parker created (and crowdsourced) a tapestry of how the Wikipedia article discussing the document looked precisely one year earlier. It’s a beautiful piece of work, and a really interesting artistic statement – called “Magna Carta (an Embroidery)“. The work went on display at the British Library as part of their celebration of the anniversary, and the BL also commissioned this fascinating documentary film:

Naturally enough, the embroidery itself got its own Wikipedia article. So, when the BL uploaded the video to YouTube with a free-license, I took it, put it on Commons, and incorporated it to that Wikipedia article with the recursive edit summary above.

I’ve created the articles about some very usual people, most especially the accident-prone Australian aeronautical balloonist Henri L’Estrange. But it was the article now known as Princess Charlotte of Cambridge had the most unusual circumstances. I started the article on the day that her mother was publicly announced as pregnant. Due to the child’s 4th position in succession to the British throne the biography was always going to be created at some point, but… how soon is too soon to create an article for something that will eventually be notable? After all, the pregnancy announcement itself was immediately worldwide news, therefore meeting the General Notability Guideline of “significant coverage in reliable sources that are independent of the subject”. As expected, the article was almost immediately, but ultimately unsuccessfully, nominated for deletion.

The debate raised some interesting philosophical arguments. Like, at what point is discussion about the child deserving of being addressed as topic in its own right rather than just as a sub-heading in the article “Catherine, Duchess of Cambridge”. There are interesting parallels with contemporary moral/legal/religious arguments about what point a foetus stops becoming part of its mother and becomes a separate entity… 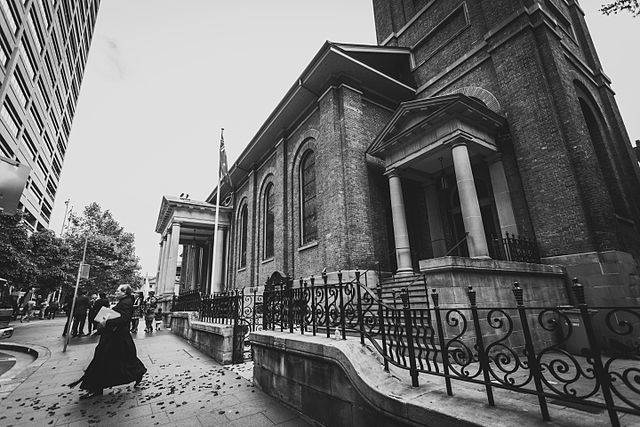 The rector leaving St James’ after the ceremony

The article was promoted on the morning of the wedding itself, Australia day 2014!

Moreover, our fantastic photographer – Prue Vickery – also agreed to release several images from the day to Commons, and they are now used in the articles for the church itself (this image above), as well as “eagle” and “Queen Victoria Building“. I bet there’s not many people who can say their wedding pics are used to illustrate Wikipedia articles! As it happens, I also make a cameo appearance in the “bells” section of the St James’ article – ringing at position no.5  🙂

In 2014 I created the Wikipedia article for “the perfect anti-object” – the Camden Bench. This is a type of street-furniture in London with design criteria entirely focused on what you cannot do with it rather than what you can, an exemplar of hostile architecture (an article I also created).

This embedded google map shows a series of “Camden Benches” on Great Queen Street, in June 2012.

In describing the creation of this style of seat I needed to find a reference for when and where the benches were first installed, but all I had was the promotional website from the manufacturer itself – not, as is required, an independent source. Coincidentally, in April 2014, Google had introduced the ability to “go back in time” and view earlier street-view images of any specific location. Now, Google isn’t normally identified as a “reliable source” for Wikipedia’s purposes, but in the context of an image library that provides photos of the same streetscape taken over a period of several years…. that makes for an excellent footnote for the most banal of facts – proving the existence of a bench!

I’ve started a lot of other unusual Wikipedia articles – from one about a solidified worm’s burrow to one on a children’s birthday cake book with a cult following, to one about a pneumatic tube service that once posted a cat! I even started Wikipedia-centric unusual articles Orangemoody and Monkey selfie (though both only as redirects).

What are your favourite articles unusual occurrences that you’ve been involved with on Wikipedia?